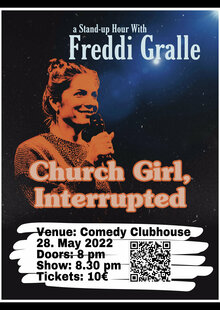 Have you been traumatised by religion? Have your parents found other ways to mess you up? Then this show is also for you!

Freddi Gralle tells the personal, sarcastic and true story of her days as a Jesus girl, then starting to date in her mid-30s and ditching church for comedy. As a pastor’s daughter, the first stages Freddi spent much time on were those in church. So being judgmental came in handy.

Freddi's comedy displays the kind of charming arrogance, sure to win over even the most cynical crowds. Freddi has performed all over Germany and Europe; appeared on roast battles for Comedy Central Comedy and is a writer for television.

-*- Want to become a member of the Comedy Clubhouse? Check out our Patreon to learn more and join! -*-